Search Judaism – A Critique: Introduction & Chapter One, section one 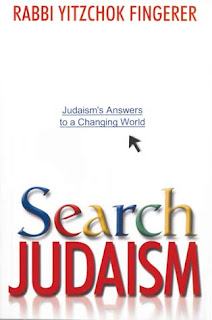 The following is a point-by-point critique of “Search Judaism: Judaism’s Answers to a Changing World” by Rabbi Yitzchok Fingerer. I’ve summarized each point and then explained what I think is wrong with it. Below the discussion of each point I’ve listed the errors and/or fallacies contained in the point.

Introduction
The book starts off, in its first sentence, by claiming that Avraham had no tradition about God and that he was a monotheist. I suppose this is true, in a sense, about the biblical God, but ignores the influence of Canaanite gods on the image of God in the chumash, which extends to using the names Baal and El as names of God. It also ignores the evidence in the chumash itself that the early Jews were hhenotheistic (devoted to the worship of a single god while acknowledging the existence of other gods) rather than truly monotheistic.

The introduction says that the book is meant to provide an alternative to “rote, habit, and uninspired Judaism” so that one can come to “actual knowledge of God.” Let’s hope it lives up to the hype.

It also ignores studies of behavior in great ape species that show many behaviors, particularly social behaviors, similar to those found in people.
{emotional appeal, straw-man}

Humans and Animals (Chapter One, section one)

There follows a story illustrating the ridiculous extremes people go to caring for their pets, including expensive health care, homes, clothes, etc. Here I must note that such extremes are not the norm and do not represent a trend.

The author then asks if it is moral for people to spend money on expensive medical treatments for their pets when there are children in need of operations; if it is moral to buy expensive clothes for pets when there are people who need to be clothed. This question assumes an either-or situation: that if the pet owners didn’t spend their money on their pets they would donate it to those in need rather than spend it on, say, a cruise, or a fancy car. Such a situation is not the case here. These pet owners are not deciding between their dog’s health and that of a child, but between their dog’s health and a vacation. If people want to spend their money on something the rest of us find foolish, that it their prerogative.
{emotional appeal, false dilemma}

The author states that he has noted historically an inverse relationship between how much people care about animals and how much they care about other people. Even if this is true, confluence is not causality.

He then states that Ancient Egyptians venerated animals to the point where they did not eat animal products – according to Ibn Ezra. Leaving aside that “Ancient Egypt” spans several thousand years of changing social rules, this just isn’t so. There are wall scenes in Egyptian tombs that depict dairy activities (milking cows, preparing cheese), and there is similar evidence that Egyptians’ diets included a wide range of meats, poultry, and fish.

He goes on to claim that the Egyptians worshiped a host of animals as gods, and lists them by name. It is true that Egyptian gods were associated with animals, but it wasn’t such a simple relationship. The gods were not animals, but were usually depicted as men or women with the head of the animal they were associated with. Thus Anubis, for example, was depicted as a man with the head of a jackal.

The preceding two points don’t actually affect the validity of his argument, but they seem indicative of the overall level of the book’s scholarship.
As a final condemnation of the Egyptians’ supposed veneration of animals and degradation of people, he says that the Torah commands we bring animal sacrifices to drive home the point that there is a difference between humans and animals. In world where (supposedly) humans were considered inferior to animals, Hashem wanted us to know that in fact we are far superior to animals.

Firstly, I don’t really understand the logic here. How does sacrificing animals show that people are superior? It could just as easily be interpreted to mean that animals are superior to people, and therefore a more worthy sacrifice for God. Secondly, this ignores the influence of surrounding cultures, all of which (including the Egyptians who are supposed to have held animals in such high regard) sacrificed animals to their gods. From an anthropological viewpoint, it is likely that the ancient Jews were influenced by the religious practices of those around them. There is even support for this view from within the bounds of Torah. The Rambam says that Hashem commanded the Bnei Yisroel to bring karbanos because all peoples in the ancient world brought sacrifices, and it would have been too difficult for the Jewish people to be too different.
{incorrect historical facts, confluence/causality, spin}

As a second example of historical kindness to animals and cruelty to people, the author cites Nazi Germany and Hitler’s vegetarianism. Again, confluence is not causality. That Hitler was a vegetarian has nothing to do with him being a genocidal monster. To illustrate the silliness of this line of argument, I would like to note that the Nazis also all wore pants. Are we now to infer some kind of causal link between pants and mass murder?

I should also note that his choice of examples, Ancient Egypt and Nazi Germany, both evoke strong negative emotions in Jewish readers, and just barely stop short of being condemnations of a practice in and of themselves (e.g., the Nazis did X, so X must be bad). I doubt these examples were chosen arbitrarily, and find it much more likely that they were chosen specifically because of the emotional reaction they cause in order to create the illusion that the author’s argument is stronger than it actually is.
{confluence/causality, emotional appeal}

The author now segues into an attack on evolution, implicitly claiming that biological evolutionary theory justifies Social Darwinism. It does no such thing, as the theory of evolution is merely an explanation for biodiversity, not a moral framework. Again the Nazis are cited, even though the corrupted evolutionary theory the Nazis used to justify their horrors had almost nothing to do with biological science and everything to do with justifying their claim of being the master race. It was based on the mistaken notion that evolution is a ladder, with some species (or in the Nazi’s useage, races) “more evolved” – and therefore superior – to others. Evolution does not work that way. The theory of evolution simply states that those animals which are best adapted to their environment will be the ones who survive to breed, and that therefore changing environments shape a specie’s development. Thus animals will gain, and more importantly for this discussion, LOSE abilities in the process of adapting to their environment. The Nazi’s claim that they were ubermenchen, more evolved than other races, was evolutionary nonsense.

Now the author makes a statement that is shocking in both its display of ignorance and blatant emotional manipulation. He says, “In theory, what could be wrong with a Darwinist, who didn’t like the color or style of your hair, weeding out your genes from the human gene pool? Scary, isn’t it?”

Yes, it is scary. It’s scary how ridiculous and malicious this statement is. Let’s break it down.

1) Hair style? Really? Because hair style is genetically determined, right?
2) What would be wrong with it is that murder and/or denying someone the right to have children is morally repugnant, regardless of how biodiversity came about.
3) Breeding existed long before Darwin, and was in fact part of what led him to come up with the theory of evolution. Breeding people for hair color could have been thought up, carried out, and possibly even justified in the interest of creating better people without Darwin.
4) That certain traits are selected for naturally because organisms with those traits out-survive similar organisms without those traits in no way justifies a person selecting and/or suppressing physical traits in other people, especially when doing so violates the other people’s human rights.
5) This is like claiming that the germ theory of disease justifies rape and murder. After all, if viruses use people to create more of themselves, even to the point of killing their host, then it must be okay for me to commit rape to procreate and to kill anyone who tries to stop me. Of course, people aren’t viruses – nor is anyone entitled to decide the course evolution should take for his fellow human beings.
6) It is a straw-man argument attempting to claim that evolution justifies murder, which as demonstrated above just isn’t so.
7) It is an emotional appeal designed to link Darwinism with murder and thereby make evolution reprehensible.
8) Even if all of the above was not true, and Darwinian evolution really did justify eugenics, that in no way affects whether or not evolution is in fact the correct explanation for biodiversity, making this an appeal to consequences.
{Incorrect scientific fact, spin, emotional appeal, straw-man, appeal to consequences}

The first section of Chapter One seems to be an attempt to show that:
1. Animals being considered more important than people is a sign of a degenerate society.
2. Evolution claims that humans are just another species of animal and (logical leap here) therefore animals are as important or are more important than people.
3. This is horrifying and justifies murder. (Not true, as demonstrated above.
Posted by G*3 at 11:46 AM

G*3
I grew up in New York in what would now be called a liberal Yeshivish family. I went to a Yeshivish elementary school, a right-wing Yeshivish high-school, and spent several years in Beis Medrash. I currently live in an Orthodox Jewish community in a mid-sized city with my wonderful wife (who is fully aware of my opinions) and our kids. I have a masters in psychology, consider myself a history buff (particularly of military history), and have an active interest in philosophy, theology, and social psychology. I’ve always been a skeptic, but usually the only one – the only one in my Orthodox Jewish high school, the only one in the post-high school yeshiva I went to, the only one in my family. Then a few years ago I stumbled across the Jewish skeptics’ blogosphere, and I was amazed to find people just like me. A little over a year later I started my own blog, http://2nd-son.blogspot.com/ where I write about my experiences, philosophy, and theology, get my thoughts in order, and generally try to convince myself that I’m an intellectual.